Drug testing is becoming very common. It seems impossible to get or keep a job without passing drug tests. You will probably be tested before you get a new job and at various intervals after that, depending on your employer. Drug tests for airline pilots, commercial truck drivers, railroad engineers and for the military and for probation monitoring seem justified but now virtually any job will require pre-employment drug tests and further tests during the course of your employment. CBD, the non-psychoactive component of marijuana is now legal in all 50 states and medical and recreational use of THC, the psychoactive component of weed containing products is now legal in 11 states with more considering legalization. Legal it may be, but you can still lose your job or suffer other problems if your lab tests are positive for Cannabis use. Suppose that you have a urinalysis for drugs coming up and you are a user of Cannabis sativa products or other drugs. Could Certo-sure-jell help you to pass a drug test?

Certo Sure Jell for THC detox

What is Certo Sure-Jell and how can it cleanse your body of pot products and help you beat a urine drug analysis? Sure Jell and Certo are popular brands of fruit pectin made by the Sure Jell Company that people have used to cleanse their systems in preparation for drug tests. Fruit pectin is a compound commonly found in jams and jellies, and both the Sure Jell and Certo brands are manufactured by the same company, called Sure Jell. Fruit pectin is a polysaccharide and type of soluble fiber naturally found in fruits like apples.  It is used to make jellies and jams as it becomes a jelly when added to water. Like other types of fiber, it can attach to cholesterol and carbohydrates in the digestive tract and cause them to be expelled in the stool rather than digested.  It is this ability of the fiber in Certo Sure Jell to divert toxins into the colon and perform a type of weed detox that is of interest to you if you need to pass a urine drug test for marijuana products coming up soon.

How can Certo Sur Jell help me detoxing and passing a pee drug test for weed products?

To answer this question, we need to spend a little time understanding how drug testing for marijuana works and how marijuana is metabolized in your body. The psychoactive component of marijuana is THC but the usual tests that screen for drugs such as a urinalysis, blood, saliva, and sweat do not measure THC itself but instead measure the main metabolite of THC which is THC-COOH. THC is metabolized in the liver and other tissues.  THC then undergoes further metabolism and THC-COOH metabolite is then cleared by the kidneys into the urine.

THC-COOH is fat-soluble and is stored in fatty tissues in the body. It is thought that the pectin in Certo Sure Jell binds with bile in the intestine and prevents the fat-soluble THC-COOH from becoming water-soluble and entering the bloodstream to be excreted by the kidneys in the urine. Instead, THC-COOH is diverted into the intestine to the colon and then it is excreted in the stool. At least that is the theoretical way that Certo Sure Jell could help you in detoxifying and passing a urine drug test by short-circuiting THC-COOH into the colon and thus preventing it from getting into the urine. A somewhat different and more detailed alternate explanation for the effect of Certo in acting as a cleaner for removal of THC-COOH from your urine and thus helping you to pass a drug test.

How long does it last?

The cleansing effect of Certo-sure-jell is a temporary one, so how and when you use Certo to help you pass a drug test is important. The window of effect is around 3-5 hours but can vary depending on factors such as body size and composition, diet, exercise, and recently consumed foods. The good news is that a Certo Sure Jell method is a quick form of detoxification and as long as you add creatine and Vitamin B to the regimen it is not detectable.

How to use Certo Sure Jell to help you pass a drug test?

Before considering this question it is suggested that if at all possible you stop using weed products as soon as you know that you have an upcoming drug test but even on short notice Certo Sure Jell might be able to help you pass your piss test. The Certo method is one of the fastest remedies available. Before you begin you will need the following supplies:

Does the Certo Sure Jell method really work?

First of all, this method is designed primarily for marijuana detox and its effectiveness in detoxing for other drugs such as for opiates, cocaine or for alcohol that might be tested for is unclear. This method is also designed to help you pass a urine drug test and its effectiveness for other tests such as a blood test or a saliva test or a hair follicle test is also unclear. Some sources do state that the Certo method works for blood tests as well.  Urine drug tests are by far the type most commonly used for employment-related drug test or for legally required tests such as for probation monitoring so most likely that is the test that you will be required to take and therefore if your goal is to pass a urine drug test for marijuana metabolites then the Certo Sure Jell method may be for you.

Certo Sure Jell reviews. Most evaluations of the Certo method are quite positive with suggestions that it is about 70-80% effective. This is a good description of one person’s positive experience using the Certo method to successfully pass a urine drug test. A sampling of individual reviews follows: 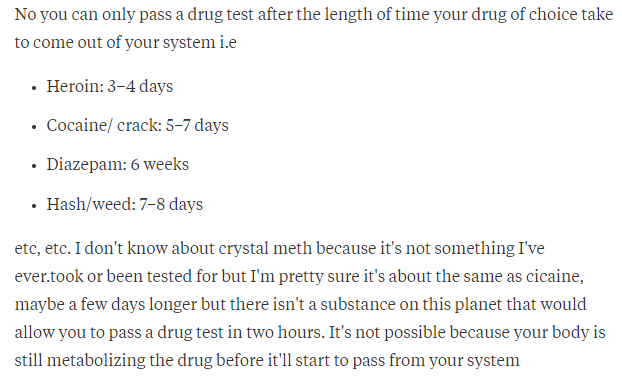 What then are the pros and cons of the Certo Sure Jell method to help you pass a drug test? The main pros are that Certo Sure Jell is easily available and cheap and it does appear to work although some question that it is the large amount of fluid which is part of this method which results in dilution of your urine specimen and not any specific effect of the fiber diverting THC-COOH from your urine to your feces for elimination. It may be well to point out that there is no scientific confirmation of how Certo Sure Jell might help you pass a drug test but there seems to be almost universal agreement that the method works.

The cons include a large amount of fluid you must drink for this method which results in urine dilution and the need to add B Vitamins and creatine to the regimen in order to color the diluted urine sample yellow and to provide creatinine in your urine which is a normally expected component and one which is looked for to be sure the sample is acceptable to be tested for drugs. Another con is that the method is said to work only for a few hours and therefore the timing of the method to proceed with your test by a few hours is necessary. Finally, some think that the Certo-sure-jell method is really just another type of dilution technique and that the Certo really adds nothing additional.

Where to buy Certo Sure Jell near me? This product is easily available on Amazon and eBay as well as at Walmart and Target stores and virtually any large grocery store will have Certo Sure Jell available in the “jello” section of the store. Certo and Sure Jell are actually two different but highly similar products made by the Sure Jell Company.

Certo and Sure Jell are products of the “My Food and Family” division of the Allrecipes Food Group of the Kraft/Heinz Companies, Kraft Foods H.J. Heinz, LLC.  Frequently asked questions are addressed on the website and you can subscribe to their emails here.

The consensus seems to be that the Certo Sure Jell method when used as described in this article, will result in a successfully passed drug test in about 70-80% of people. Other factors such as how frequently and how recently pot products were used, how much body fat you have, how much you exercise and what your diet is, all contribute to the metabolism of THC and THC-COOH. The sooner you stop using marijuana products before a drug test that you can, the more likely it is that you will pass the test. The Certo Sure Jell method can probably help you pass a urine drug test for marijuana products.